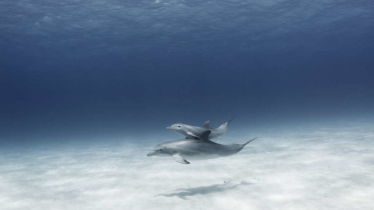 The intelligence of dolphins never fails to amaze us less-flippered friends – and we’re not just talking about the dolphin that stole a woman’s iPad this week.New research has shown that dolphins “sing” to their unborn calves in their womb. Dolphins use “signature whistles” to identify and communicate with one another, much like we use names. Mother dolphins have been observed performing a signature whistle for the baby in the months running up to the birth and up to two weeks after.This has been studied before, but this new research looked into the rates of these whistles and if they changed after the birth. Audra Ames, of the Marine Mammal Behavior and Cognition Lab at the University of Southern Mississippi, showed some of their findings at the annual American Psychological Association conference, Live Science reports.”It’s been hypothesized that this is part of an imprinting process,” Ames told Live Science at the conference.

“We actually do see that human babies develop a preference for their mother’s voice in the last trimester. We don’t know if that’s something that’s going on here, but it could be something similar,” she added.

They recorded 80 hours of audio – both two months before and after the birth – at a tank in Six Flags Discovery Kingdom in Vallejo, California. The enclosure was home to a pod of dolphins, including a 9-year-old female that was pregnant with a calf, later named Mira. They discovered the mother performed a new whistle that intensified around the birth and then begun to taper off over the months following. They also found that other dolphins in the area remained quieter in this period, which they believe was a conscious effort not to confuse the calf and to ensure it “does not imprint on the wrong signature whistle.”

Additionally, as the mother started to taper off her repetitions, the other dolphins in the group begun to increase the rates of their own whistles. The mother’s whistle for the calf in this early period also differed from the whistle other dolphins gave. Who knows, perhaps it’s just a parent’s pet-name for their kid.